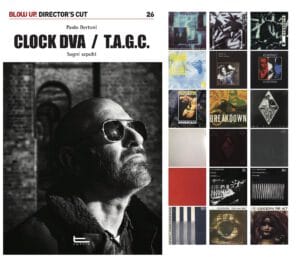 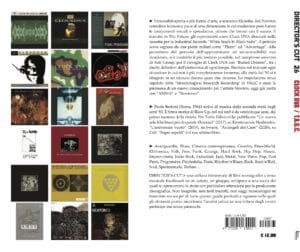 We are pleased to announce the release of a new Italian language book on Adi Newton, edited by Paolo Bertoni for Tuttle Editions. The book is available from 1st April 2022 as follows :

Paolo Bertoni (Rome, 1964) has been writing about music since the mid-1980s. Ciao 2001, Blast!, Dynamo!, FareMusica are some of the publications he has collaborated with. He has been on the staff of Blow Up since 1997, from the first issue of the magazine. His publications include books on Einstürzende Neubauten ‘A new sun (which burns more than it illuminates)’ (2017), Swans ‘The universal void’ (2019), Coil ‘Archangels of Chaos’ (2020). 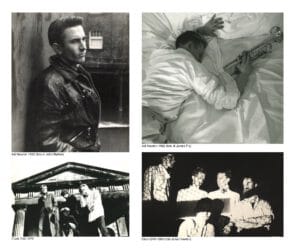 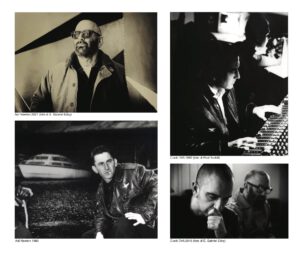 Clock DVA are one of the pre eminent pioneers of late 70’s/80’s experimental music along side and in collaborative association with Throbbing Gristle and Cabaret Voltaire. As one of the founder members of The Future, which evolved into The Human League, Adi Newton began his life long involvement with sound via painting and through a theatre project which began his involvement with sound, he founded Clock DVA and TAGC/The Anti Group in 1978.

Clock DVA’s acclaimed albums include the 1988 album “Buried Dreams” (Considered by many as an electronic masterpiece) and the 1980 electro-acoustic album “Thirst” released on the cult label Fetish. Considered by Paul Morley in his NME Album review as one of the Best Debut Albums of the 1980’s, it sat alongside Joy Division’s “Unknown Pleasures” and The Fall’s “Dragnet”. Clock DVA continue to present and release new music and perform critically acclaimed audio visual works and performances through out Europe and the USA.

Newton also Directs TAG/The Anti Group an independent multi-media research & development project active in many related areas. Strictly speaking TAG are not a group, but a variable collection of individuals contributing under invitation and the directorship of Adi Newton. Genre-breaking works include the ambisonic album “Digitaria” 1986 and “Test Tones“, a series of pioneering albums, produced in 1985/6 which have had lasting impact on the development of extreme forms of electronic music.

Newton has also been involved in numerous art museum presentations and performances, including the prestigious ARS Electronica Linz, The V & A London and Art Futura Museo Nacional Centro De Arte Reina Sophia Madrid. He has recently returned to painting and intends to explore and develop his multi discipline practice into the art and painting arena with sound and visual installations while still remaining very active within the DVA/TAGC projects. Throughout all these, Newton directs all projects as well as the multi media production company ARMComm/Anterior Research Media Communications.

“Adi Newton has long since described the process of making music as his research. It represents a more thoughtful and reflective body of work than that which dominates his peer group. In particular, Newton’s grasp of the philosophical connotations of technology placed him apart from the majority of its practitioners.” – NME

If you are interested in this content and would like to stay up-to-date on new Rizosfera productions, events and other information, you can subscribe to our newsletter and we will send you an email from time to time with a summary of the latest news you may have missed.

This website uses cookies to improve your experience while you navigate through the website. Out of these, the cookies that are categorized as necessary are stored on your browser as they are essential for the working of basic functionalities of the website. We also use third-party cookies that help us analyze and understand how you use this website. These cookies will be stored in your browser only with your consent. You also have the option to opt-out of these cookies. But opting out of some of these cookies may affect your browsing experience.
Necessary Sempre abilitato
Necessary cookies are absolutely essential for the website to function properly. These cookies ensure basic functionalities and security features of the website, anonymously.
Functional
Functional cookies help to perform certain functionalities like sharing the content of the website on social media platforms, collect feedbacks, and other third-party features.
Performance
Performance cookies are used to understand and analyze the key performance indexes of the website which helps in delivering a better user experience for the visitors.
Analytics
Analytical cookies are used to understand how visitors interact with the website. These cookies help provide information on metrics the number of visitors, bounce rate, traffic source, etc.
Advertisement
Advertisement cookies are used to provide visitors with relevant ads and marketing campaigns. These cookies track visitors across websites and collect information to provide customized ads.
Others
Other uncategorized cookies are those that are being analyzed and have not been classified into a category as yet.
ACCETTA E SALVA